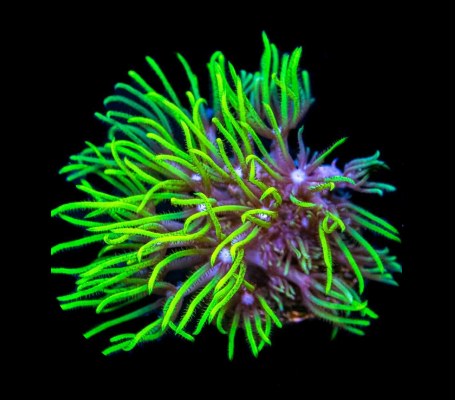 This is not a WYSIWYG item. You will be purchasing a similar coral shown in the photo.

The Green Star Polyp, commonly referred to as GSP, is a soft coral that is considered a great starter coral for aquarists. They are also known as starburst polyp, star polyps, and daisy polyps.

GSP grows under most conditions, and is even considered semi-invasive by some reefers as once it starts to grow, there is very little that will slow it down or stop it. It is an encrusting species that will grow on most surfaces including glass, plastic, rock %25 25 25 26 even over coral.

GSP is a popular coral with beginner aquarists as it not only fills empty looking space reasonably quickly, but it adds a sense of movement and flow to the tank as it waves around in the flow of the aquarium.